When the Indiana High School Athletic Association changed their travel rules for out of state competition, Ironman Tournament Team Director Corey Haddad went to work to bring the best talent the Hoosier state has to offer to the 2022 Ironman. Crown Point, who will be ranked as a top ten team this year, won the Indiana team state championship and Brownsburg was runner-up. Jimtown will send one wrestler and that happens to be Flo Wrestling’s number one ranked P4P Christian Carroll, a transfer from New Prairie where he was the Indiana State champion last year.

Crown Point
The Bulldogs will enter a full team that includes five state finalists from last year including two state champions, and three other placers for a total of eight placers that dominated the Indiana state championships. The list does not include last year’s number one ranked Jesse Mendez who now wrestles for Ohio State. It’s a seasoned lineup with one sophomore (Gavin Jendres-2nd-106), two juniors (William Clark-5th-195, Paul Clark-4th-220) and five seniors (Logan Frazier-1st-126, Anthony Bahl-2nd-132, Samuel Goin-1st-152, Cody Goodwin-4th-160, Orlando Cruz-2nd-182) Goin is ranked #9 and Cruz is ranked #12 by Flo Sports.

Brownsburg
This team from Central Indiana enters five wrestlers from their state runner-up team in 2022. Two sophomores (Jake Hockaday-1st-106, Gunner Henry-3rd-182), two juniors (Preston Haines-2ND-113, Brady Ison-132), and one senior (Leighton Jones -3rd*285). Brownsburg made a strong statement for the quality of their program by battling Crown Point down to the last match in the Indiana High School Coaches Team State Duals losing by the narrowest of margins, 29-28.

Jimtown
The Jimmies from Elkhart are bringing one wrestler to the Ironman, and he will be one of the featured attractions the fans are eagerly wanting to see. Christian Carroll is the number one ranked P4P wrestler in the country according to Flo Sports ran kings. Carroll, wrestling for New Prairie won the 2022 Indiana State championship in that state’s 220-pound weight class. 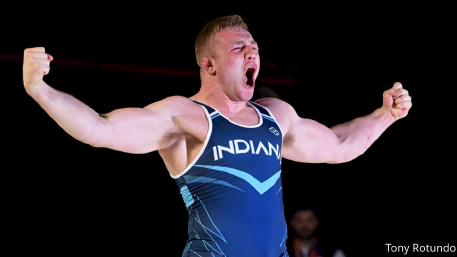 Jimtown coach Jeremiah Maggart said; “We decided to compete in this event because it is one of the toughest tournaments in the country and gives us an opportunity to see the highest quality competition. Coming from Indiana we have never had this opportunity until now and we look forward to the opportunity to represent our state and school.”

Carroll is considered the #4 prospect in the country and is also ranked the #1 220-pound wrestler by Flo Sports. Carroll recently committed to Oklahoma State University.
A native of Elkhart, Indiana, Carroll has an impressive list of accomplishments.
1st-2021 220 Junior Freestyle Nationals
1st-2021 220 Super 32
1st-2020 195 Super 32.