This award is presented to an individual wrestler who scores the most points for his respective team. It is an objective award based on specific results rather than subjective opinion. The award was created by Col. (ret) David Ritterpusch, author of “The Standard Of Excellence,” an extensive history of wrestling at the iconic Blair Academy. The award was first presented at the 2009 Walsh Jesuit Ironman Wrestling Tournament, and was subsequently presented at the Beast of the East and National Prep tournaments. It will remain as an exclusive award at these three tournaments.

Scroll down below the graphic for more information about each individual. 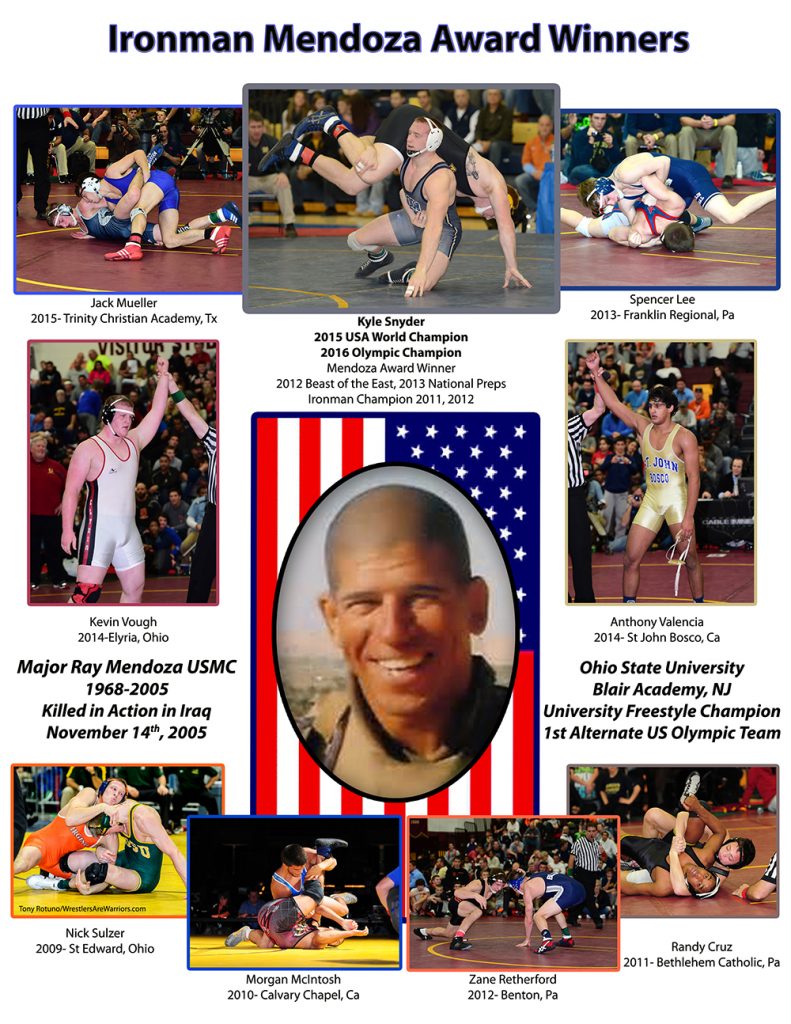 Individual wrestlers who have earned this award

2009-Nick Sulzer, St. Edward (OH). Ironman champion at 160 after a runner-up finish in 2008. Won the state championship in 2010 and was named outstanding wrestler. Compiled a 40-0 record as a senior and finished his high school career with a 138-16 record. At the University of Virginia, Sulzer was a three-time All American and four time NCAA qualifier. His career record at Virginia was 122-27.

2011-Randy Cruz, Bethlehem Catholic (PA). Ironman champion at 132. Captured the Pennsylvania AA state title as a senior, three-time AA finalist and four-time AA place winner. Holds the school record with a 152-20 record. Randy was NCAA All American with his eighth place finish in the 2016 NCAA tournament.

2012-Zain Retherford, Benton (PA). Ironman champion at 138. Retherford posted a perfect 47-0 mark at Benton High School, closing out his high school career with a 130-3 career record, including two state titles. He won the PIAA title as a freshman with a 40-1 mark then placed third as a sophomore. The two-time All-American won the 2016 NCAA individual championship at 149 pounds.. He ended his sophomore year, a two-time All-American and NCAA Champion.

2013-Spencer Lee, Franklin Regional (PA). Two time Ironman champion at 106 (2013), 120 (2014). Lee also won the 2013 Bill Barger OWA. An injury prevernted Lee from competing in the 2015 Ironman but he will be attemting to become a rare three time Ironman champion in 2016. Lee is a two-time World Champion and has committed to the University of Iowa. He will be a pleasure to watch in 2016. Lee is considereds in many circles to be the greatest high school wrestler of all time.

2014-Anthony Valencia, St. John Bosco (CA) Two time Ironman Champion at 170 in 2013 and 2014. One of the rare Ironman four time placers. The two time California state champion committed to Arizona State but red shirted his freshman year when he qualified for the Olympic Trials.

2014-Kevin Vough, Elyria (OH) Elyria’s first Ironman champion at 285 as a sophomore in 2014. Followed up with a Division I OHSAA state championship after a tird place finish as a freshman. An injury prevented his participation in 2015.