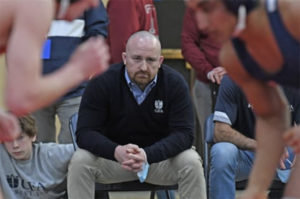 Green Farms Academy located in Westport, Connecticut, brings a taste of New England wrestling to the Ironman for the first time.

The sport of wrestling has given a lot to Greens Farms Academy’s Jack Conroy ’06. He has coached the Dragons into a nationally respected program that has risen to the ranks of a multi-time league champion and New England regional power, and he has helped lead wrestlers to individual championships on both a regional and national level.

After graduating from GFA in 2006, Conroy took his wrestling talents to Bucknell University. Upon his graduation there, he returned to his alma mater as a physical education teacher and became the school’s wrestling coach.

As of this writing Coach Conroy is planning to enter three of his Dragon wrestlers in the Ironman.

Nate Taylor, Super 32 All American, the only New England wrestler to make the podium. US Open All American (U17), NHSCA Freshman Champion, Third place National Prep 2021 and 2022.

There were only two wrestlers from Connecticut to place at this year’s US Open.  Nate Taylor claimed 5th place at 92 Kilograms and Brady Kaupp finished 8th at 52 kilograms.